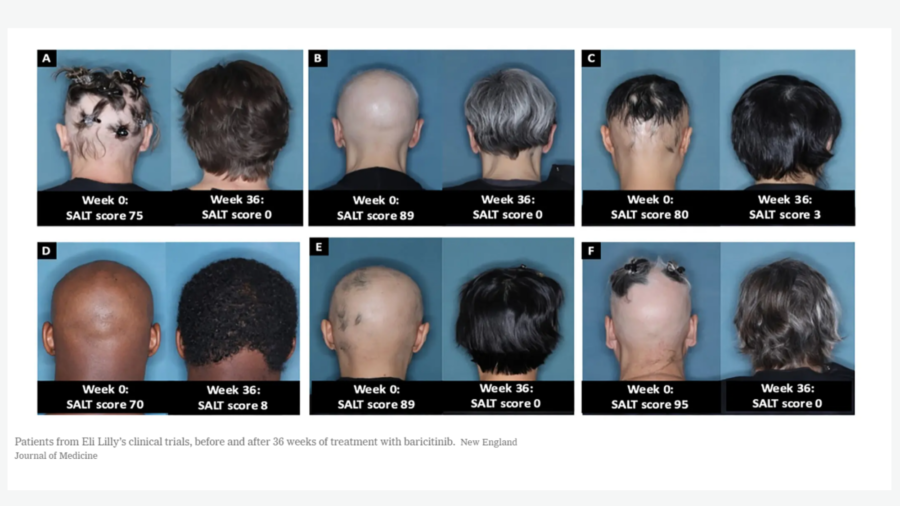 The drug, made by Eli Lilly, is already used for rheumatoid arthritis, and could be followed by two more drugs from other companies.

The disease can vary in severity, but for some, it can be life-altering — a total loss of body hair, including eyelashes and eyebrows, even nose hair and hair in the ears. And, until recently, for those with alopecia areata, there was no treatment to make the hair grow back.

But on Monday, the Food and Drug Administration approved baricitinib, a drug made by Eli Lilly that regrows hair by blocking the immune system from attacking hair follicles. Two other companies, Pfizer and Concert Pharmaceuticals, are close behind with similar drugs, known as JAK inhibitors. The drugs are already on the market for the treatment of rheumatoid arthritis and other autoimmune diseases. F.D.A. approval is important for insurance coverage of these expensive drugs, which have a list price of nearly $2,500 a month.

The Lilly drug was studied in two trials, sponsored by the company and published last month in the New England Journal of Medicine, involving 1,200 patients with severe alopecia areata. Nearly 40 percent who took the drug had complete or near-complete hair regrowth after 36 weeks. After a year, nearly half of the patients had their hair back.

Dr. Brett King, a dermatology professor at Yale University, was the principal investigator for the two Lilly trials and is also leading trials sponsored by the other companies. He said he was optimistic that the success rate for the drugs would get better. Manufacturers may be able to improve the JAK inhibitors for alopecia areata. And when all three companies have drugs on the market, patients who do not respond to one company’s drug might respond to one of the others.

Patients in the Lilly study experienced relatively mild side effects, including a small increased risk of acne, urinary tract infections and other infections. Those side effects were easily treatable or improved without treatment.

The Lilly trial results “are impressive,” wrote Dr. Andrew Messenger of the University of Sheffield and Matthew Harries of the University of Manchester in an accompanying editorial. They added that the findings “represent the first published phase 3 trials of any treatment for this condition.”

More than 300,000 Americans live with severe alopecia areata, according to the F.D.A. The impact of the disease is hard to overstate, Dr. King said.

For most people with alopecia areata, the disease manifests as one or a few small bald patches on the head. But those with severe cases have something much worse. They may notice small bald spots on their heads one day. Three months or even three weeks later, they have no hair on their bodies.

Dr. King is widely credited by colleagues for piquing interest in the use of JAK inhibitors to treat alopecia areata. He said it all began when he noticed three abstracts presented at medical meetings in 2012 and 2013. The studies, led by Dr. Raphael Clynes and Dr. Angela Christiano of Columbia University, involved mice but indicated that JAK inhibitors might reverse alopecia areata.

Shortly afterward, a 25-year-old man named Kyle came to see Dr. King for the treatment of psoriasis. He had almost no hair and his head and body had big, red scaly psoriasis plaques.

“I looked at him and said, ‘You have alopecia areata,’” Dr. King said.

Kyle began noticing he had severe hair loss when he was at a dance in high school, wearing a hat. He went to the bathroom, took off his hat and, to his horror, found a large amount of hair in the hat.

He looked at Kyle and said, “If you want to try something wild that has not been done before, there is a medicine approved for rheumatoid arthritis and being developed for psoriasis. There is some suggestion in mice that it might work.”

Kyle agreed to take tofacitinib, a JAK inhibitor made by Pfizer that is similar to the Lilly drug. Eight months later, he had his hair back.

Dr. Maryanne Makredes Senna, the director of the Hair Loss Center of Excellence at Beth Israel Lahey Health in Massachusetts, was among them.

She would prevail upon insurers to cover the drugs, and sometimes she would succeed.

“It’s a beautiful thing to see the amazing impact,” said Dr. Senna, who has received consulting fees from Eli Lilly and Pfizer. “They come in with no hair, totally withdrawing from life. Their eyes are cast down. They come back and say, ‘I have my life back. I have my self back.’”

Dr. Natasha Atanaskova Mesinkovska, the chief scientific officer at the National Alopecia Areata Foundation and a dermatology professor at the University of California, Irvine, helped the pharmaceutical companies find patients for their trials. She, too, has been impressed by the results in those who have responded to the drugs.

Severe hair loss not only “robs a person of their identity” but is “a medical issue,” she said, adding that when people lose hair in their nose and ears, it affects allergies and hearing.

Christian Daniels, 27, a data center technician who lives in Peoria, Ill., said hair loss also affected his eyes. Without eyelashes, dust would get into his eyes and irritate them so much he began putting Vaseline on his eyelids.

Mr. Daniels’s hair started falling out when he was 25. Within a month, all of his body hair was gone.

Covid-19 was “a blessing in disguise,” he said, because he could work at home.

“I felt like my life had been put on hold,” he said. “I felt like the only thing that mattered was how to get my hair back.”

He found the Lilly trials by “Googling and Googling.”

Now, he said, “it’s almost like it never happened,” although he still has flashbacks sometimes when he looks in a mirror and remembers his hairless self.

Dr. Brittany Craiglow, a dermatologist in private practice in Fairfield, Conn., who is married to Dr. King, said severe alopecia areata was especially difficult for children.

One patient, Cassidy Mackwell of Canton, Mass., lost her hair when she was 8. When adults saw her, they assumed she had cancer.

“People would come up to Cassidy when we were in a restaurant having dinner,” said her mother, Melissa Mackwell. Some would even try to pay for their meals. “They would hug her and say, ‘I’m so sorry. Keep fighting.’”

One of Dr. Craiglow’s patients, Brooke Nelson, who lives in Belleville, N.J., lost all of her long blond hair when she was in first grade. Brooke was so embarrassed by her hair loss that her mother, Danielle Nelson, home-schooled her.

She took Brooke to medical center after medical center, to doctor after doctor, but to no avail. “I would have given up my house, given up everything if that meant giving Brooke back her hair,” Ms. Nelson said.

Ms. Nelson was ready to take Brooke to China for stem cell therapy when she found Dr. Craiglow, who gave Brooke a JAK inhibitor. Her hair grew back.

Melanoma researcher covers all the bases