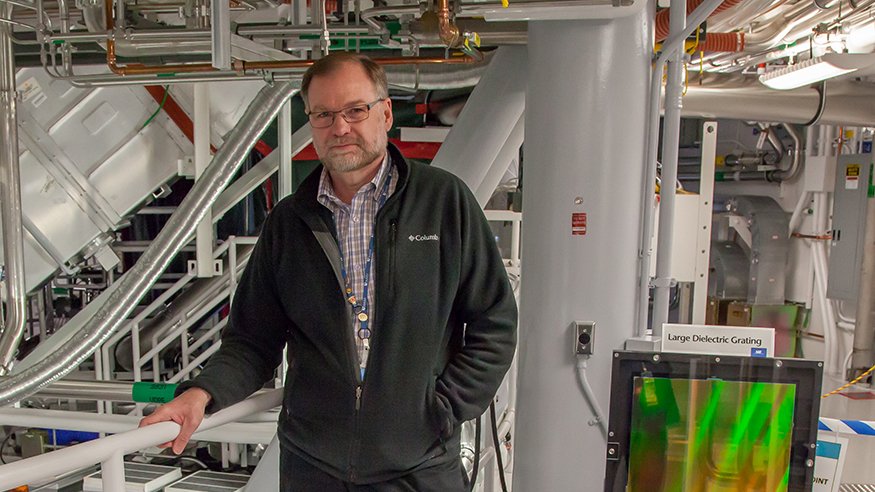 “We are in a renaissance in light source technology,” stated Dr. Chris Barty, who joined UCI and the BLIMC as professor of Physics and Astronomy in July. And “Renaissance Man,” is one way to describe Barty.

With Ph.D. and M.S. degrees in applied physics from Stanford University and B.S. degrees, each with honors, in chemistry, physics, and chemical engineering from North Carolina State University, Barty joined UCI after serving as the chief technology officer for the National Ignition Facility (NIF) and Photon Science Directorate. Prior to that he was the founder and director of the mission-based Photon Science and Applications program at Lawrence Livermore National Laboratory (LLNL).

At LLNL, Barty helped manage and guide the technical evolution of the world’s highest-energy and largest laser within the NIF – a laser the size of a football stadium. He also played key roles in the development of ultrahigh intensity laser science, laser inertial fusion energy and laser defense activities at LLNL. For more than a decade, Barty has also pioneered laser-Compton technology, an extremely bright, x-ray and gamma-ray light source that can be created with short-pulse lasers and energetic electron beams. In the gamma-ray spectral region, the peak brightness of a laser-Compton light source pulse can be 15 orders of magnitude beyond any other man-made light, making it possible to access and manipulate the nucleus of an atom with photons, an emerging field known as “nuclear photonics.” These highly mono-energetic gamma-ray sources produce narrow, laser-like beams of incoherent gamma rays that can penetrate through lead and other thick containers and can be tuned to a specific energy so they predominately interact with only one kind of material.

“In the early days of lasers, the controlled manipulation of the outermost electron structure of the atom became possible, leading to a wide variety of new applications and science that now impacts many, many aspects of our daily lives,” stated Barty. “Similarly, laser-Compton gamma-ray sources are now enabling ‘nuclear photonics,’ or the photon-based manipulation of proton motion within the nucleus, and thus are leading to new applications and science including the isotope-specific detection of materials for security and advanced medical imaging, and enable novel forms of discovery-class, nuclear spectroscopy.” Since Barty first coined the term “nuclear photonics” in 2008, the related international community has grown rapidly and now includes more than $500 million of activities and a major biennial conference by the same name.

“[At LLNL] We constructed a proof-of-principle laser-Compton machine and used its photons to detect the presence of lithium concealed behind aluminum and lead,” shared Barty. “The machine created a record peak brilliance. It used an existing linear accelerator and custom laser systems designed specifically for laser-based Compton scattering x-ray and gamma-ray sources.”

Barty’s patented laser-Compton technology is now being transferred to industry, and is the foundation behind a new company, Lumitron Technology, Inc., which he helped launch and which will be headquartered in the University Research Park adjacent to campus. As the lead hire in the Convergence Optical Sciences Initiative (COSI), he will concentrate his efforts on building the world’s highest output, tunable, mono-energetic, compact, x-ray light source based on laser-Compton scattering. “My focus will not only be to establish laser-Compton systems as the ‘gold standard’ for imaging and therapy, but also to target a broad ecosystem of new science and technology across a range of industrial, commercial and healthcare applications.”

“When I look here [at UCI], I see the grand vision. BLIMC completely gets the story where academic and industrial activities are encouraged which doesn’t happen everywhere,” stated Barty.

“We are pushing the frontier of basic science and engineering. Laser-Compton technology will enable the location, study and treatment of disease in ways not previously possible. We have a tremendous opportunity to change healthcare and make a real impact on medicine. The unique x-ray capabilities of compact, laser-Compton sources will also play a pivotal role in materials science, micro-fabrication, and the rapid emergence of additive manufacturing.”