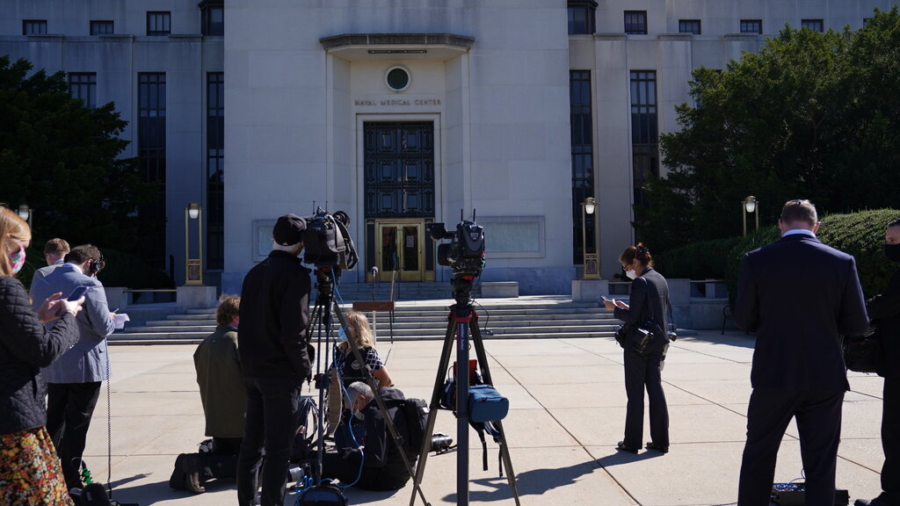 The president is hospitalized and reporters are fighting for basic facts. What should elderly leaders — many of America’s top politicians are over 80 — reveal about their health?

When John Bresnahan was starting out as a reporter in the mid-1990s, he approached Senator Strom Thurmond of South Carolina, who had run for president in 1948 as a segregationist and was still shuffling through the Capitol. Senator Thurmond, born in 1902, gave no indication that he’d understood Mr. Bresnahan’s question and responded with a non sequitur.

The young reporter saw his older colleagues shaking their heads and snickering. The kid had expected the elderly senator to be able to carry on a conversation! They didn’t report on Senator Thurmond’s infirmity — that wasn’t how things were done — but they all knew about it.

These days, Mr. Bresnahan is the congressional bureau chief for Politico. A Navy veteran with the demeanor of a guy you’ve dragged out of a dive bar in the eighth inning of the Yankees game, he has become Capitol Hill’s grim reaper, a rare reporter with the stomach to print some obvious truths: that some top lawmakers aren’t all there.

In 2017, Mr. Bresnahan and his colleague Anna Palmer wrote that the powerful Republican chairman of the Senate’s appropriations committee, Thad Cochran, was “frail and disoriented,” a story that sped his retirement. Last month, Mr. Bresnahan and Marianne LeVine reported that fellow Democrats were worried whether Dianne Feinstein was up to leading her side of the Amy Coney Barrett confirmation hearings because she gets “confused by reporters’ questions, or will offer different answers to the same question depending on where or when she’s asked.”

This kind of reporting is impolite. It’s also totally obvious, and a natural feature of America’s recent slide toward gerontocracy. On Capitol Hill, everyone “knows this stuff,” Mr. Bresnahan said. “I just am the one to write it.”

I was thinking of Mr. Bresnahan as I watched reporters arrayed at Walter Reed military hospital on Sunday facing yet another moment of crisis for the news media, one even more basic than many of the hard challenges of the Trump era. The White House press corps is trying to perform a fundamental job of journalism — delivering simple facts about President Trump’s condition — in the face of Mr. Trump’s years of casual fabrication and his doctors’ clumsy evasions and contradictions. They’re covering the biggest policy failure of his administration in the most literal sense imaginable.

And yet they’re also doing something obviously uncomfortable. It’s hard not to feel some human revulsion for the sight of healthy, TV-ready young journalists braying for the vital signs of a sick old man. But there is no question that this prying is in the urgent public interest, and the White House press corps is working with admirable aggression and openness. We need to know who is in charge of the government, and to understand the outcome of President Trump’s long evasion of the coronavirus crisis as Americans begin to vote.

By refusing to speak honestly about basic facts, the White House is really “annihilating the press’s role,” said Elizabeth Drew, a former New Yorker Washington correspondent who covered President Ronald Reagan’s shooting in 1981 and his staff’s success at playing down the grave risk to his life.

Physical decline is likely to be a major feature of the next few years of American politics, at least. The current line of succession, after Mr. Trump and Vice President Mike Pence, features Speaker Nancy Pelosi, who is 80, and the Senate president pro tempore, Charles Grassley, 87, who also runs the Senate Finance Committee. Ms. Pelosi’s two most powerful deputies in the House, James Clyburn and Steny Hoyer, are both 80 or older. Over in the Senate, the chairman of the Armed Services Committee is 85 and coasting to re-election. The chairman of the Appropriations Committee is 86. Joe Biden, who turns 78 next month, is nearly a year younger than the Senate majority leader, Mitch McConnell, who is also seeking re-election in November.

This concentration of power in the hands of the old is an American phenomenon, Derek Thompson recently wrote in The Atlantic, noting that our leaders are getting older as European leaders get younger.

“If government of the elderly, by the elderly, and for the elderly will not perish from the Earth, the rest of us might suffer instead,” he lamented.

But it also means that journalists must get past the taboos and be frank about the normal process of aging, and must emulate Mr. Bresnahan’s stomach for blunt truths. Typically, whispers about age and health have remained on the margins of the political conversation, often driven by the right-wing aggregator Matt Drudge, whose visceral grasp of news has always included obsessions with age and health. In 2007, Mr. Drudge briefly capsized the presidential campaign with news of a new spot on John McCain’s head, for instance. His site is consumed, to the dismay of Mr. Trump’s supporters, with the president’s illness. (One of Drudge’s 18 headlines about Mr. Trump’s condition on Sunday morning: “Blind mystic predicted it!”)

Among the people scrambling this weekend at American newspapers are obituary writers, as major outlets assigned top reporters to update Mr. Trump’s obituary — Peter Baker at The New York Times, Marc Fisher at The Washington Post and Mark Z. Barabak at The Los Angeles Times, people at each paper told me. But the easiest solution to this media quandary is for citizens to elect leaders of working age. A friend recently told me sadly how nice it had been to see a national politician, Kamala Harris, jog down a few stairs.

But for the next few years, at least, our leaders’ age and health will remain big news. We need a reporting culture that’s ready to handle the public decline of this generation of leaders, as long as they insist on declining in public. Searching questions about everything from sleep to cognition shouldn’t be off limits.

“It will help if reporters are medically knowledgeable, and ask the right questions, e.g. blood pressure, heart rhythm, sleep disorders,” Dr. Mark Fisher, a professor of neurology and political science at the University of California, Irvine, told me on Sunday. “The more specific and precise questions reporters ask, the better. A robust fund of knowledge by the reporter is a great advantage.”

When politicians won’t share honest results, health experts’ long-range diagnoses should be treated as news. The whispers by reporters and lawmakers’ aides about feeling as if they work in a nursing home should find their way onto the record. And the most powerful people in the country should learn from Mr. Trump’s disastrous example that if you lie consistently about your health, nobody will believe you in a crisis.

None of this comes easily.

“Reporters are human beings and we cover these people,” Mr. Bresnahan told me. “You have respect for who the person was. It’s difficult.”